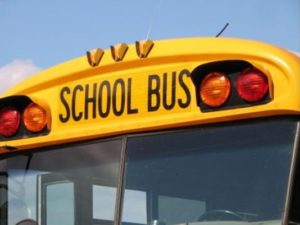 Earlier this morning just after 8:30 am, Officer Daniel Brooks, who was working an extra duty assignment in the area of Chestnut Street and Vermont Avenue, radioed in to headquarters that he was “out with two vehicles, one of which was a school bus with approximately 20 children on board, involved in a road rage incident”.

Officer Ralph Hatt and Christopher DiBiase were dispatched over to assist. While speaking to the operator of the school bus, 54 year old Angel Colon of Toms River, Officer Hatt detected an odor of an alcoholic beverage on his breath. Colon was also described as having slurred speech and bloodshot eyes.

Further investigation resulted in his arrest for Driving Under the Influence. In addition,  Angel Colon was charged with the Endangering of the Children and is currently awaiting transport to the Ocean County Jail.