(photos) This year marks the 11th year of our fallen brother Officer William “Nichie” Preslar’s death in the Line-of Duty. He was a six year veteran killed in a car accident on May 14, 2007, on New Egypt Road, when he swerved to avoid striking a deer, and struck a tree. Last year was the unveiling of the highway that was dedicated by The Lakewood Police Department in Nichie’s memory.

Widow Lisa Preslar after the tragic loss, has inspired many through her strength and courage by formally being the President of Garden State C.O.P.S. for 5 years (link: Garden State C.O.P.S.), and has participated in the annual Police Unity Tour marking this year’s ride her 10th consecutive year. Lisa is raising their two daughters into two remarkable young women, Julia (16) and Gracie (15).  Julia is a junior in high school and Gracie is a freshman in high school.

At Julia’s Prom this year, she had a wonderful surprise visit for a pre-prom photo by a few of Nichie’s brother Officers, adorned in class A uniform’s. The Officers’ were so pleased to be there for her and have this memorable photo taken of Julia’s special moment. Julia was so radiantly beautiful and content by the thoughtfulness. (photo left to right front row) Off. N. Cusanelli, Off. P. Kearns, Off. Chase Messer, D/Lt. G. Staffordsmith, Off. J. Novak, Off. C. Dibiase, (left to right middle row) Off. C. Dunphey, Off. Z. Hatt, Off. J. Macerino, D/Sgt. L. Marshall, (left to right back row) Off. L. Nieves and Off. D. Dowden.

In Remembrance of our fallen brother in blue “Nichie”, you will never be forgotten and forever in our hearts! 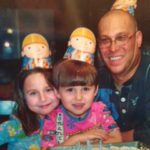 Nichie’s Birthday April of 2007, last picture that was taken of him. 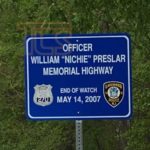 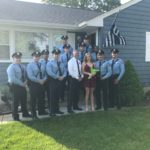